Yale University is located in downtown New Haven, Connecticut, a small New England city of 130,000 situated on Long Island Sound. Founded in 1638 as America’s first planned municipality, New Haven is a lively harbor city with a proud history, an energetic civic life and rich educational and cultural opportunities. A city of neighborhoods, New Haven offers a variety of restaurants, theaters, shops, and galleries. The Connecticut countryside and public beaches, as well as two large metropolises New York City and Boston are easily accessible. 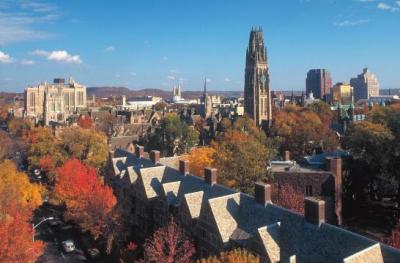 New Haven is a major center for theater and music, including the innovative Yale Repertory Theater, the Long Wharf Theater (a regional theater with many nationally acclaimed plays), the Shubert Theater, and the Yale Cabaret (in which the works of young playwrights can frequently be seen). More than one-hundred and seventy-five musical events take place at the University during the academic year. These include the Sprague Hall Chamber Music Series, the New Haven Symphony concerts, Yale Symphony and Philharmonia concerts, the Woolsey Hall concert series, and many others presented by Yale School of Music faculty and students.

The Yale Art Gallery has representative collections of ancient, medieval, renaissance, and modern art. It is complemented by the Yale Center for British Art, which houses British paintings, drawings, prints, and rare books from the fifteenth to the mid-nineteenth century.

The facilities of the Payne Whitney Gymnasium are available to students in all professional and graduate schools of the University. Payne Whitney contains two pools, three jogging tracks, three rowing tanks, squash and handball/racquet ball courts, plus rooms for dance, fencing, and basketball. Free instruction at various levels is offered in a number of regularly scheduled classes. The David S. Ingalls Rink, the tennis courts, and the golf course are also available to students at established fees. During the summer months, the Yale Sailing Club, located on Long Island Sound, is available to graduate students. It is well equipped with 14-foot racing boats and windsurfers.

The Graduate-Professional Student Senate, a University-wide organization representing the interests of graduate and professional students as a community provides an effective means for voicing concerns to the University administration and to the various departments and schools. The Graduate-Professional Student Center at Yale (The GPSCY) provides a central meeting place for graduate and professional students. It is open to members and their guests. The GPSCY operates a full service bar with reduced prices, sponsors receptions, dances and parties, and hosts conferences, rehearsals, recitals, and exhibitions. The McDougal Graduate Student Center, located in the Hall of Graduate Studies includes a coffee shop, lounge, library, performance space, and will host a variety of intellectual, cultural, social, and professional development events. There are many other formal student organizations at Yale, covering a broad spectrum of interests and activities. Graduate-professional intramural sports are increasing each year and now include twenty sports activities and over 1,500 participants.

In addition to these and other recreational activities that a lively university town can offer, a broad range of religious and special interest organizations provide ample opportunity to get to know other students on the Yale campus.

There are several different committees across the University dedicated to improving and facilitating graduate student life at Yale, including the GPSS (http://gpss.yale.edu/), and the GSA (http://gsa.yale.edu/).

Many graduate students in our program live in apartments in neighborhoods such as those found along Orange and Prospect Streets and Whitney Avenue (http://livingnh.yale.edu/). Situated at the northern end of campus, a village-like atmosphere prevails among the many faculty, graduate students and postdocs who live in older two-three family homes prevalent in this area. Some students live in other neighborhoods of New Haven, small towns inland and along the shore, while others prefer dormitory rooms and apartments that are available for single and married students.

The University maintains listings of rooms, apartments and houses available in the community, and it is generally quite easy to find affordable housing. The cost of living in New Haven is lower than in most larger cities on the East Coast. Owing mainly to the presence of an active and vigorous Yale community, life in New Haven offers many advantages and opportunities to graduate students who are interested in activities outside the Department. For more information about graduate student housing, please see https://housing.yale.edu/.

New Haven is recognized as a city of innovation, culture and prosperity. Approximately 20 square miles with nearly 130,000 residents and conveniently located between Boston and New York, New Haven is “large enough to be interesting, yet small enough to be friendly.” New Haven is a great place to live, work, do business, and enjoy life. New Haven is home to many restaurants, shops, theaters, and outdoor activities. The City and Yale University work together on creating a vibrant downtown and Yale has been a lead sponsor of special events such as the International Festival of Arts and Ideas and Free Concerts on the Green which bring hundreds of thousands of city and suburban residents downtown. Additionally, hundreds of campus events and venues are open to the public - frequently free of charge. Yale museums, concerts, and plays attract more than 500,000 visitors a year to downtown and help make New Haven the cultural center of the region.
Additional NavigationClose