Home » Diversity » Shining the Spotlight on Diversity in the Psychology Department » Interviews with Current and Past Students and Faculty » Spotlight: April Bailey 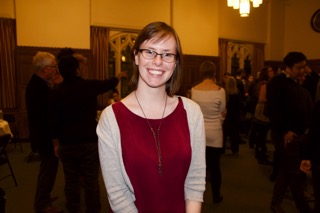 April Bailey is currently a third year graduate student in Social Psychology. She is a recent SPSP poster award finalist for her work, “Who Counts as Human?: Antecedents to Androcentric Behavior.”

Can you describe your current work?

I’m interested in how gender affects perceptions of other people in contexts where it really shouldn’t. I have one line of work looking at how men seem to have a claim to typical or prototypical normal personhood. Men and women are roughly equal proportions of the population, but when people are asked to come up with typical, prototypical representations of people, humans, individuals, students, etc., they are way more likely to come up with men. I think this is kind of curious, and I’m trying to understand it better.

The other line of work is in how gender is integrated with other more acute or relevant cues during processing, so specifically I’ve just looked at nonverbal behaviors so far. How, when men and women engage in identical power-relevant postures, they’re not perceived in the same way. When women are in high power posture postures and men are in low power postures, it takes participants longer to process the postures than in the congruent versions, which would be women in lower power postures and men higher power postures. And we also see a really early difference in an ERP component, which I would like to replicate before I get super excited about, but that implicates attention might be important here.

How did your research interests develop?

And then I’m just really interested in this phenomenon when people think about men as being kind of typical or normal. I always think about the crosswalk sign man, and how the sign to cross the road is similar in shape to the sign for a male bathroom. They’re everywhere and everyone’s totally fine with it and it doesn’t seem weird, but it seems weird to me.

How did your interest in psychology more broadly develop?

I’ve always just been interested in human behavior, what makes us do the things that we do, it’s classic Kepler, “why are things the way they are and not otherwise?”.  I would think about that all the time when it comes to human behavior, and why we are passionate about the things we are passionate about. Then in undergrad I took a couple courses that were all circling around this from different approaches. I took an anthropology course and a psychology course and a women, gender, and sexuality studies course and I just really was drawn to the scientific method as an approach to knowledge. So that’s why I ended up in psychology.

How did you choose to study at Yale?

I looked at the faculty and I was really intrigued by Jack [Dovidio]’s work – he was very famous and had made such huge contributions and my advisors in undergrad knew him and could recommend him at an interpersonal level, and I was really drawn to Marianne [LaFrance] as well because she had such an overtly feminist orientation to science, and I was really excited by that because I hadn’t experienced that in undergrad. I think we all have theoretical perspectives that drive our work, and this was one that I appreciate. I wanted to work with someone who would have a similar orientation and not be scared or put off by feminism.

I didn’t take time off. I just always liked attaining knowledge and I wanted to be the expert in a field, and that’s always been the case, even before college, in grade school. And it’s not about being the best, it’s about being curious, and I like activating that curiosity by learning these things. I wanted to get the highest degree that I could in order to pursue that, and then it became more practical in college when I started getting research experience. My sophomore year I started working in a lab and that continued until I graduated. I really like the scientific method and think that it’s the best!

What’s next in your work? What’s on the horizon?

With the androcentrism work, we really need to get to the core of the issue. We’ve been looking a lot at moderators. The next move needs to be empirically distinguishing it from other forms of gender bias. Marianne (LaFrance) and I think it really is different, but it’s not talked about that way. So if it really is different, we should be able to show that.

What’s something people might be surprised to learn about you?

I trained for eleven years in the classical Russian ballet tradition. Also, I grew up in an evangelical fundamentalist Christian family. As a scientist and a feminist, I think that people don’t expect that.