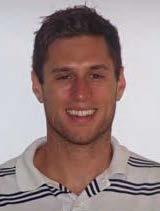 Kevin Anderson is a graduate student in the Holmes Lab. He completed his undergraduate work at the University of New Hampshire in 2011, after which he worked on fMRI investigations at both the NIMH and Vanderbilt University. Kevin is interested in how the brain instantiates reward, and how individual differences in affective and motivational processes bias decision-making, behavior, and cognition. Kevin’s current work uses graph theory and resting-state and functional brain imaging to elucidate the neural substrate of motivated goal pursuit and cognitive-affective mechanisms that are disordered in mental illness.